Netmarketshare's browser market share has just been updated to include May 2018 share information. The company recorded a drop below the 10% mark in the desktop and laptop devices market for the Mozilla Firefox browser. 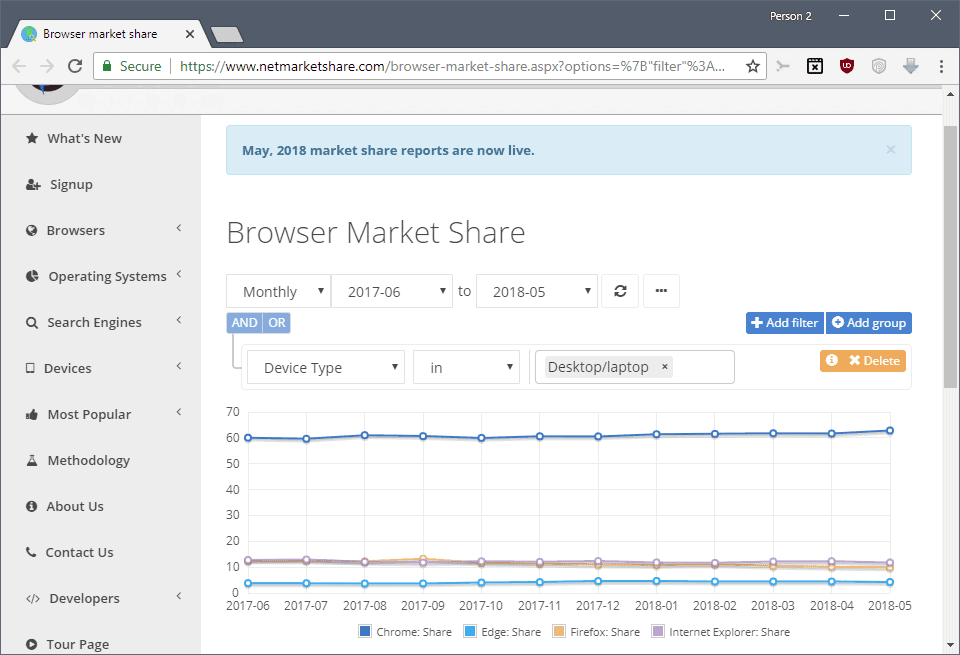 Netmarketshare recorded a downwards trend for the Firefox browser in the past 12 months and while that may sound alarming on first glance, it may not be as bad as the numbers indicate.

Netmarketshare collects usage stats and does not get "real" numbers from companies like Mozilla, Google or micr0$0ft. The company monitors the use of browsers on a subset of Internet sites and creates the market share reports using the data it collects.

While that is certainly good enough for trends if the number of monitored user interactions is high enough, it is not completely accurate and real-world values can be different based on a number of factors. While it is unlikely that they differ a lot, it is certainly possible that the share is different to the one reported by the company.

Mozilla launched Firefox 57 Quantum in 2017 as an effort to revitalize Firefox by dropping support for legacy systems such as the classic add-on system in favor of the new standard WebExtensions, and integrated new features such as support for multiple processes, and faster components in the browser.

Mozilla has yet to reveal how successful the change was for the organization in terms of users. How many users did switch from Firefox to another browser, and how many switched to Firefox because of the new browser?

Netmarketshare's statistics indicate that Firefox lost more users than it gained but we don't know for sure unless Mozilla reveals before and after numbers to the public.

The end of Firefox?

Even if Firefox lost users it is not the end of the browser. Opera, Vivaldi and other browser companies show that it is possible to develop browsers with a lower market share and the same can be true for Mozilla. The organization may need some restructuring in the coming years to take this and -- probably -- falling revenue from search engine inclusion deals into account but Firefox won't just go away because it is dropping.

Some will always use their favorite if the browser can handle the newer sites.