THREE rare historic books on the shelves of a Denmark university library have been found to be poisonous. But it wasn’t because the texts were considered toxic.

University of Southern Denmark researchers have published an article in The Conversation detailing the deadly discovery.

The three rare books from the 16th and 17th century were undergoing x-ray fluorescence analysis. The idea was the radiation from the x-ray could discern different chemicals in their pages and bindings — and hopefully uncover lost texts.

Other books in the library had previously been found to have used recycled fragments of much older parchments — such as Roman and canonical law — in their bindings.

So the university was looking for more.

“We tried to identify the Latin texts used, or at least read some of their content,” the researchers write. “But then we found that the Latin texts in the covers of the three volumes were hard to read because of an extensive layer of green pigment which obscures the old handwritten letters.”

The books were taken to the lab for more intensive analysis intended to peer through the paint to find the chemicals of the print below.

But the analysis threw back an unexpected result.

The green stains were arsenic. And it was as toxic as the day it was put there.

The Danish researchers were seeking traces of much older parchment documents when they discovered the toxic substance.Source:News Corp Australia

“This chemical element is among the most toxic substances in the world and exposure may lead to various symptoms of poisoning, the development of cancer and even death,” the researchers write.

Their first thoughts went to the toxic tome in Umberto Eco’s famous novel The Name of the Rose.

“Could something like this happen in reality? Poisoning by books?,” they write.

It turns out, the pigment was not malicious.

Arsenic was a common component of the ‘Paris green’ paints and lacquers of the 19th century.

“In its heyday, all types of materials, even book covers and clothes, could be coated in Paris green for aesthetic reasons. Of course, continuous skin contact with the substance would lead to symptoms of exposure.”

The paint was probably applied to the book covers to restore their looks, as well as protect them from vermin.

“Now, the library stores our three poisonous volumes in separate cardboard boxes with safety labels in a ventilated cabinet,” the researchers write “We also plan on digitising them to minimise physical handling. One wouldn’t expect a book to contain a poisonous substance. But it might.”

I want my Mummy!

The remarcable detail is that this case reminds the plot of the the book/movie "The Name of the Rose" by Umberto Eco.

As an old man, Adso of Melk recounts how, as a young novice in 1327, he and his mentor, Franciscan friar William of Baskerville, traveled to a Benedictine abbey in northern Italy where the Franciscans were to debate with Papal emissaries the poverty of Christ. The abbey boasts a famed scriptorium where scribes copy, translate or illuminate books. The monk Adelmo of Otranto —a young but famous manuscript illuminator— was suspiciously found dead, below a tower with only a window which cannot be opened. The abbot seeks help from William, who is renowned for his deductive powers. William is reluctantly drawn in by the intellectual challenge and his desire to disprove fears of a demonic culprit. William also worries the abbot will summon officials of the Inquisition if the mystery remains unsolved.

William later finds Venantius, a Greek translator and the last to speak with Adelmo, dead in a vat of pig blood. The corpse bears a black stain on a finger and the tongue. The monks suspect a supernatural cause, fears reinforced when the saintly Fransciscan monk Ubertino di Casale warns that the deaths resemble signs mentioned in the Book of Revelation. In the scriptorium, William inspects Adelmo's desk, but is blocked by Brother Berengar, the assistant librarian, and Brother Malachia, the head librarian, denies William access to the rest of the building.

William encounters Salvatore, a demented hunchback, and his protector, Remigio da Varagine, the cellarer. William deduces that both were Dulcinites, members of a heretical sect that believes that clergy should be impoverished. William does not suspect them of murder though, since Dulcinites target wealthy bishops, not poor monks. Nevertheless, Remigio's past gives William leverage in learning the abbey's secrets. Salvatore tells William that Adelmo had crossed paths with Venantius on the night that Adelmo died. Meanwhile, Adso encounters a beautiful semi-feral peasant girl who has sneaked into the abbey to trade sexual favours for food, and is seduced by her.

Returning that night to Venantius's desk, William finds a book in Greek, and also a parchment with Greek writing, smudges of a color blended by Adelmo for illuminating books, and cryptic symbols written by a left-handed man using invisible ink. Berengar sneaks into the darkened library, distracts William and steals the book.

Berengar is later found drowned in a bath and bearing stains similar to those on Venantius. William narrates his conclusions that Adelmo's death was indeed suicide, due to giving in to Berengar's requests for homosexual favors, but he fell from a different tower. Venantius received a parchment from Adelmo before Adelmo's death, and Berengar is the only left-handed man in the abbey. William theorizes that the translator transcribed the Greek notes on the parchment from a book, and that the book is somehow responsible for the deaths. The abbot is unconvinced and, burning the parchment, he informs William that the Inquisition — in the person of Bernardo Gui, an old adversary of William — has already been summoned.

Determined to solve the mystery before Gui arrives, William and Adso discover a vast, hidden library above the scriptorium. William suspects the abbey hid the books because much of their contents comes from pagan philosophers. Gui finds Salvatore and the peasant girl fighting over a black cockerel while in the presence of a black cat. For Gui, this is irrefutable proof of witchcraft, and he tortures Salvatore into a false confession. The abbey's herbalist finds a book written in Greek in his dispensary, and is overheard telling this to William. Soon, the herbalist is found murdered in the now ransacked dispensary.

Learning of Remigio's Dulcinite past, Gui arrests him for the murders. Along with Salvatore and the girl, Remigio is brought before a tribunal, with Gui, the abbot and William as judges. Remigio proudly admits his past but denies having killed anyone in the abbey. While the abbot quickly condemns Remigio for murder, William points out that the murders are tied to the Greek book, which Remigio could not read, and warns that Remigio's execution will not end the murders. Under Gui's threats of torture, however, Remigio "confesses" by falsely summoning the Devil. Gui arranges for the prisoners to be burned at the stake, while William, having "relapsed", will be taken to Avignon

Soon afterwards Malachia is found dying, with black stains on his tongue and finger. As the monks prepare Gui's prisoners for execution, William and Adso re-enter the secret library and come face to face with the Venerable Jorge, the oldest denizen of the abbey. Having decoded the lines on the translator's parchment, William demands that Jorge turn over the book that the dead men had been reading: Aristotle's Second Book of Poetics on Comedy. Believing laughter to be sinful, Jorge killed those who had read the book by poisoning its pages, but William does not fall for this trap when Jorge "rewards" him with the book. Confronted, Jorge accidentally starts a blaze that quickly engulfs the library. William stays behind, trying to save some of the books and encouraging Adso to leave. Jorge kills himself by consuming the poison-coated pages.

Seeing the fire, the monks abandon the prisoners, allowing the local peasants to save the girl, though Salvatore and Remigio die. Adso chases Gui, who manages to escape him, but the peasants push his wagon off a cliff, impaling him. As William and Adso depart, Adso encounters the girl, stops for a few seconds, but eventually chooses to go with William. The much older Adso states that he never regretted his decision, as he learned many more things from William before their ways parted. He also says that the girl was the only earthly love of his life, although he never learned her name.

Rocca Calascio in Abruzzo: a shooting location of the film 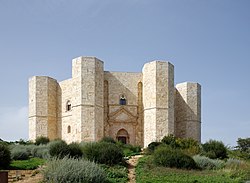 
Thank you Management & Posters of LSC for making this a wonderful place.
"Global Warming - Blah... A CO2 misnomer and not man made I say!"
Back to News
Reply to quoted posts     Clear